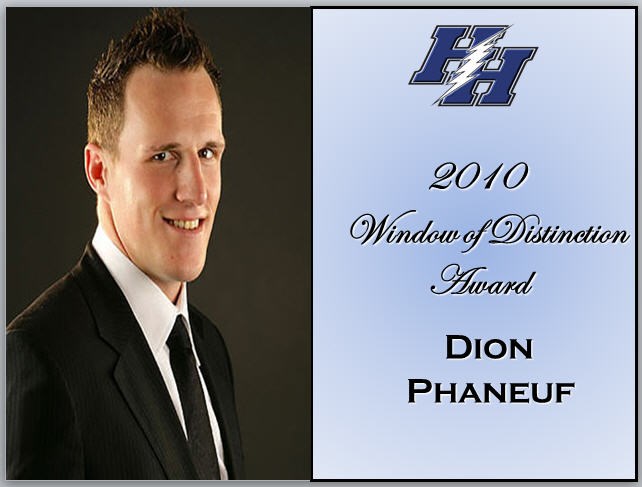 The mere mention of Dion conjures up images of crushing body checks, blistering slap shots, end to end rushes and of course the infamous glare! Dion is a fierce competitor. Make no mistake on the ice, Dion is all about business.  One thing for certain, Dion lives his life and plays hockey on the edge. His personal philosophy is epitomized in a speech given by Theodore Roosevelt at La Sorbonne, Paris in 1910  entit led “Citizens in a Republic”. He called all citizens to dare to live on the edge.  One of the truths within the speech is entitled “The Man in the Arena” and it reflects Dion’s approach to life.  The speech outlined the responsibilities of citizenship. It reads like this.

It is not the critic who counts; not the man who points out how the strong man stumbles, or where the doer of deeds could have done them better. The credit belongs to the man who is actually in the arena; whose face is marred by sweat and blood; who strives valiantly; who errs and comes short again and again because there is no effort without error and shortcoming.“Far better is it to dare mighty things, to win glorious triumphs, even though checked by failure...than to rank with those poor spirits who neither enjoy much nor suffer much, because they live in a gray twilight that knows not victory nor defeat.

You see Dion would rather risk everything to win it all and in the process have to experience the frustration of a loss, than play it safe and live in the middle; to live in the category of mediocrity and the average. He refuses to live in the grey twilight zone that never wins and never loses.  Roosevelt ended his speech with the following charge.

Dion has played for Team Canada on many occasions. His U17 and U18 teams captured Silver and Gold not unlike his World Junior experiences where a Silver and Gold were captured. The Top Prospect CHL Magazine selected Dion as the number one player in Canada as a sure bet and Blue Chipper to have an impact in the NHL.  The 2003 entry draft was considered one of the very best drafts of athletes ever to be selected into the NHL. Calgary with their first pick, in the First round, selected Dion 9th overall. The highest drafted Rebel in franchise history. A record he still holds. His last two seasons in Junior he earned the Top WHL defenseman award and First Team All-stars. Dion was also chosen as the Top Player in the WHL.  His Rookie season with the Calgary Flames was outstanding. He holds the Flames franchise record for most goals by a rookie defenseman (20), second for NHL rookie defensemen in goals to  Bobby Orr’s (21). He was a Calder Trophy Nominee as Rookie of the Year along with Alex Ovechkin, Sidney Crosby, and named to the NHL ALL Rookie Team. There was no sophomore jinx for Dion; his point total was recognized by the fans who selected him to his first NHL ALL Star Game as a First Team All-Star starter. In his third season he was selected as an All Star as well as a Norris Trophy Nominee for Best NHL Defenseman. Dion also played for Team Canada at the World Championships in Moscow, Russia. Since entering the league in 2005 Dion leads all NHL Defensemen in Goals 76, Power-Play Goals 48, Game winning Goals 21 and Shots 1,233.